I divided the Proclamation into five parts with headings making it easy to read in a gathering. I then attempted to translate it into simpler language so that I could understand it. This simpler version is at the end of this document and may be helpful to read next in the gathering or to use for discussion and prayer. If you print off the PDF at the link above, it will be easy to cut the portions for each reader.

For fun pictures of Abe, please read this post to the end!

Reader 1
Abraham Lincoln’s Proclamation of Thanksgiving in Washington, D.C. on October 3, 1863 written by Secretary of State William Seward 152 years ago.

By the President of the United States of America, A Proclamation.

An acknowledgement of God’s presence
The year that is drawing towards its close has been filled with the blessings of fruitful fields and healthful skies.  To these bounties (which are so constantly enjoyed that we are prone to forget the source from which they come) others have been added, which are of so extraordinary a nature, that they cannot fail to penetrate and soften even the heart which is habitually insensible to the ever watchful providence of Almighty God.

Reader 2
An acknowledgment of the reality of war
In the midst of a civil war of unequaled magnitude and severity, which has sometimes seemed to foreign States to invite and to provoke their aggression, peace has been preserved with all nations, order has been maintained, the laws have been respected and obeyed, and harmony has prevailed everywhere except in the theatre of military conflict; while that theatre has been greatly contracted by the advancing armies and navies of the Union.

Reader 3
Encouragement to persevere in what is good
Needful diversions of wealth and of strength from the fields of peaceful industry to the national defense, have not arrested the plough, the shuttle or the ship; the axe has enlarged the borders of our settlements, and the mines, as well of iron and coal as of the precious metals, have yielded even more abundantly than heretofore. Population has steadily increased, notwithstanding the waste that has been made in the camp, the siege and the battlefield; and the country, rejoicing in the consciousness of augmented strength and vigor, is permitted to expect continuance of years with large increase of freedom.

Reader 4
An invitation to collectively thank God
No human counsel hath devised nor hath any mortal hand worked out these great things. They are the gracious gifts of the Most High God, who, while dealing with us in anger for our sins, hath nevertheless remembered mercy.

It has seemed to me fit and proper that they should be solemnly, reverently and gratefully acknowledged as with one heart and one voice by the whole American People.

I do therefore invite my fellow citizens in every part of the United States, and also those who are at sea and those who are sojourning in foreign lands, to set apart and observe the last Thursday of November next, as a day of Thanksgiving and Praise to our beneficent Father who dwelleth in the Heavens.

Reader 5
A recommendation for humility, compassion and prayer
And I recommend to them that, while offering up the ascriptions justly due to Him for such singular deliverances and blessings, they do also, with humble penitence for our national perverseness and disobedience, commend to His tender care all those who have become widows, orphans, mourners or sufferers in the lamentable civil strife in which we are unavoidably engaged, and fervently implore the interposition of the Almighty Hand to heal the wounds of the nation and to restore it as soon as may be consistent with the Divine purposes to the full enjoyment of peace, harmony, tranquility and Union.

In testimony whereof, I have hereunto set my hand and caused the Seal of the United States to be affixed.

Done at the City of Washington, this Third day of October, in the year of our Lord one thousand eight hundred and sixty-three, and of the Independence of the United States the Eighty-eighth. By the President: Abraham Lincoln, William H. Seward, Secretary of State

By the President of the United States of America, A Proclamation.
(simpler language)

Reader 1
This year has been filled with blessings so bountiful that we may forget them and fail to be aware of the watchful provision of Almighty God.

Reader 2
Even in the midst of this severe civil war, peace has been preserved with all nations, order maintained, laws respected and obeyed, and harmony prevailed everywhere except in this battle.

Reader 3
Peaceful industries have had to support this battle; but still, farming, shipping, territorial growth, and mining have yielded more abundantly than before. Population has increased even with the waste of lives in war, and we are stronger due to the expectation of increased freedom.

Reader 4
This prosperity does not come from our strength, but is the gift of the Most High God. For He could have been angry about our sins, but he has been merciful. Together, we should reverently acknowledge His mercy. Therefore, I invite us all to set apart and observe the last Thursday of November as a day of thanksgiving and praise to our generous Father in heaven.

Reader 5
I also recommend that we do these three things:

I have sealed this proclamation.

(no copyright for President Lincoln's Proclamation)

To see the Thy lovingkindness Art Card in the Thanksgiving Collection at Flower Girl Greetings, please click here.
The original artwork for this Art Card was very large and was created in the early 1990s for a woman to put above her mantel. 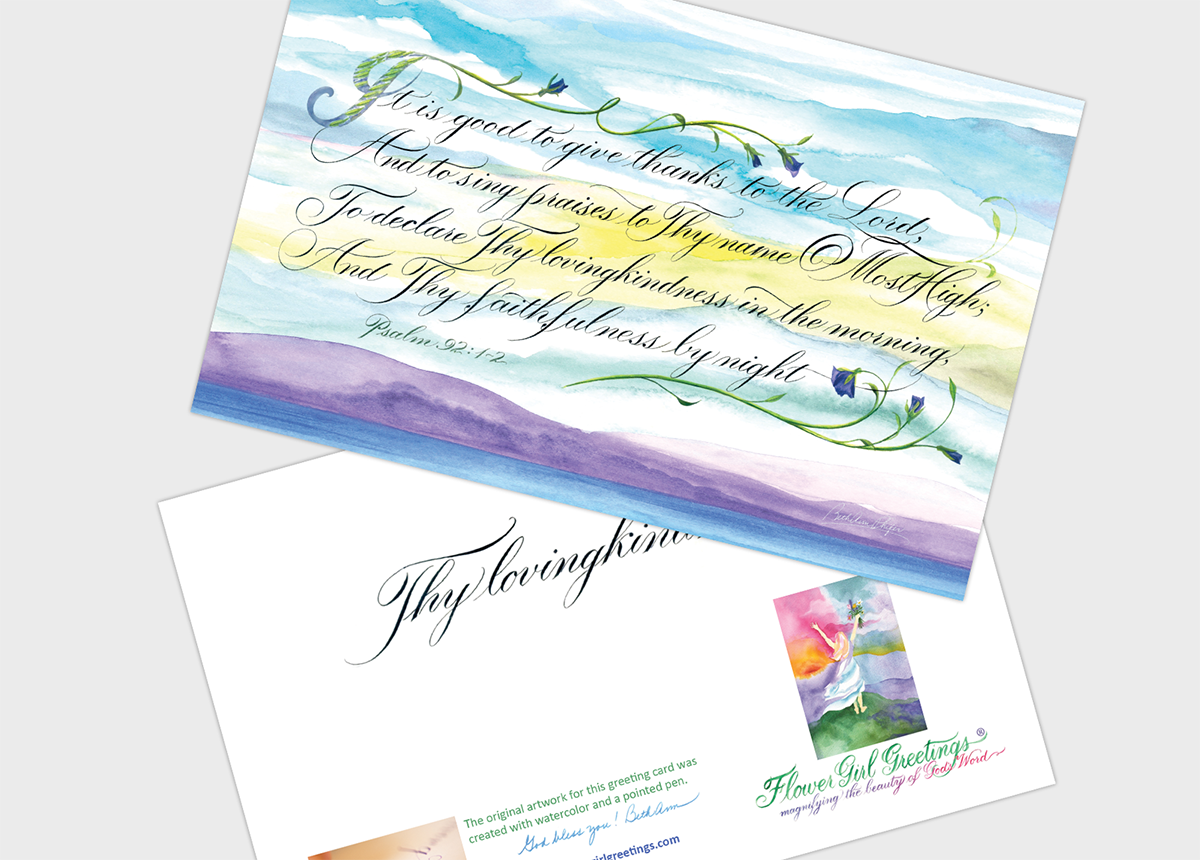 I took the following pictures of Abraham Lincoln in Troy, Ohio where this amazing statue was resting until it was moved to another location. This statue is "Lincoln and Everyman" by Seward Johnson, Atelier Inc. It is 31 feet, 6 inches high. The idea Johnson wanted to convey is that the key points in Abe's address are just as valid today. 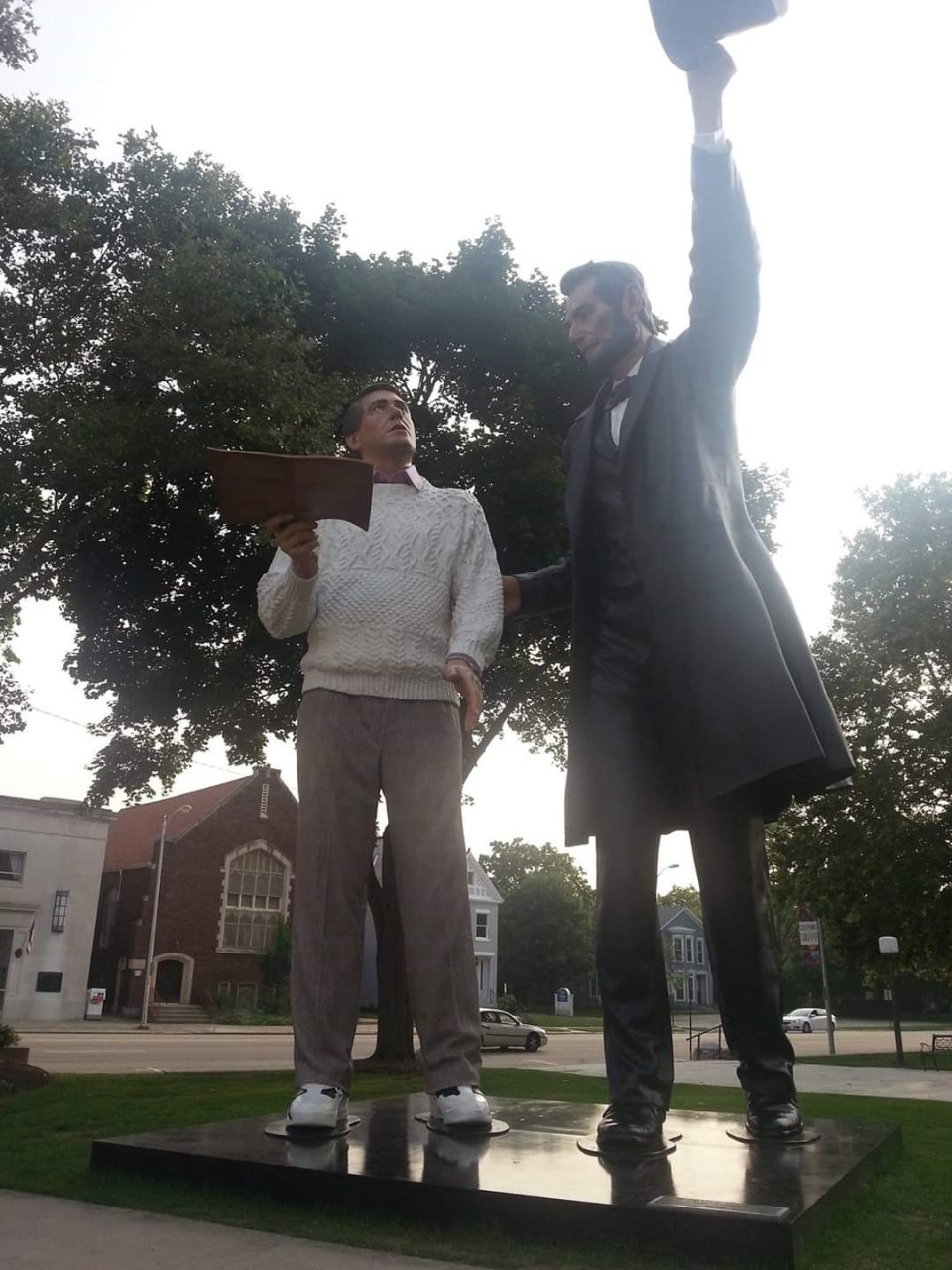 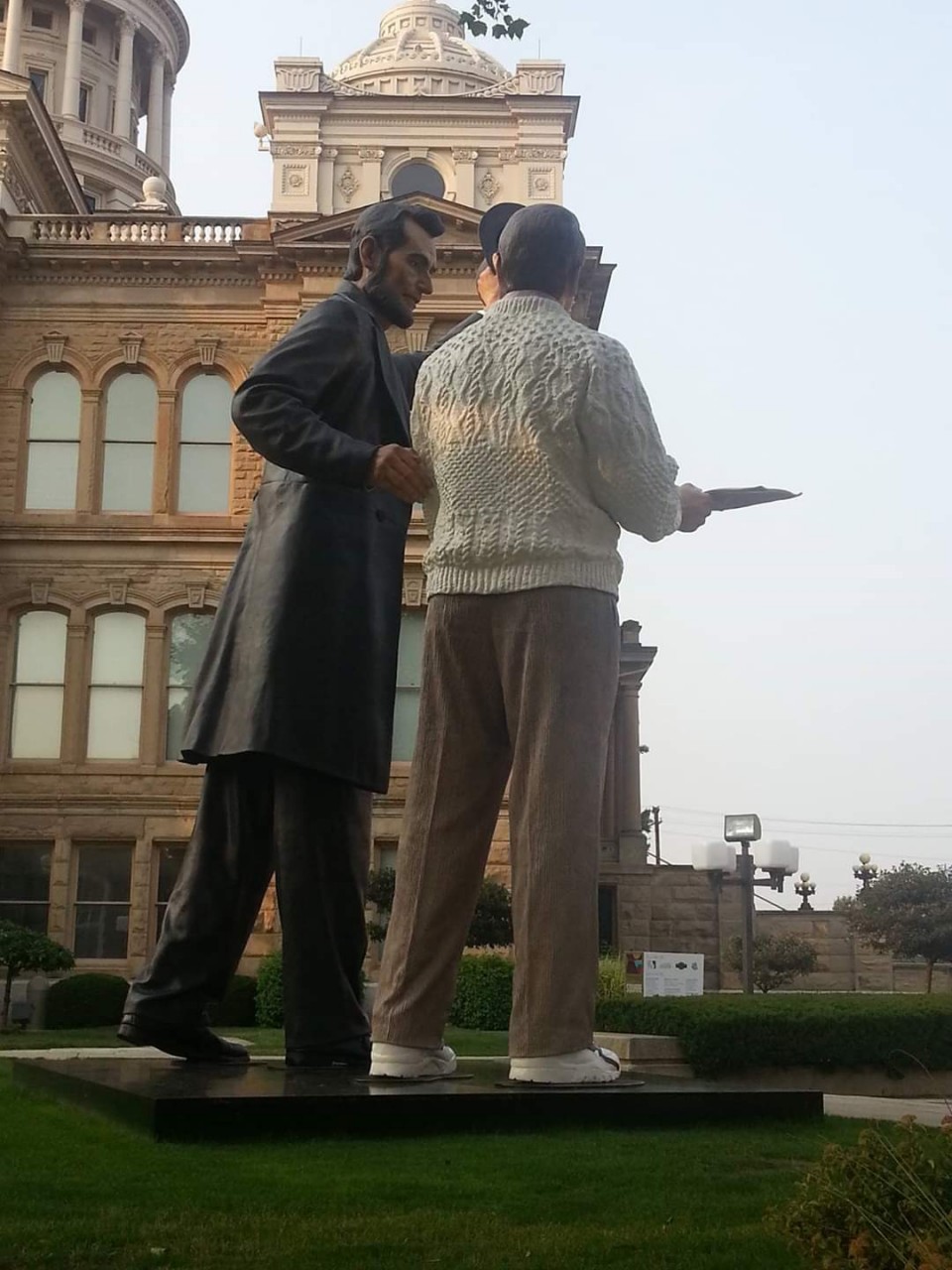 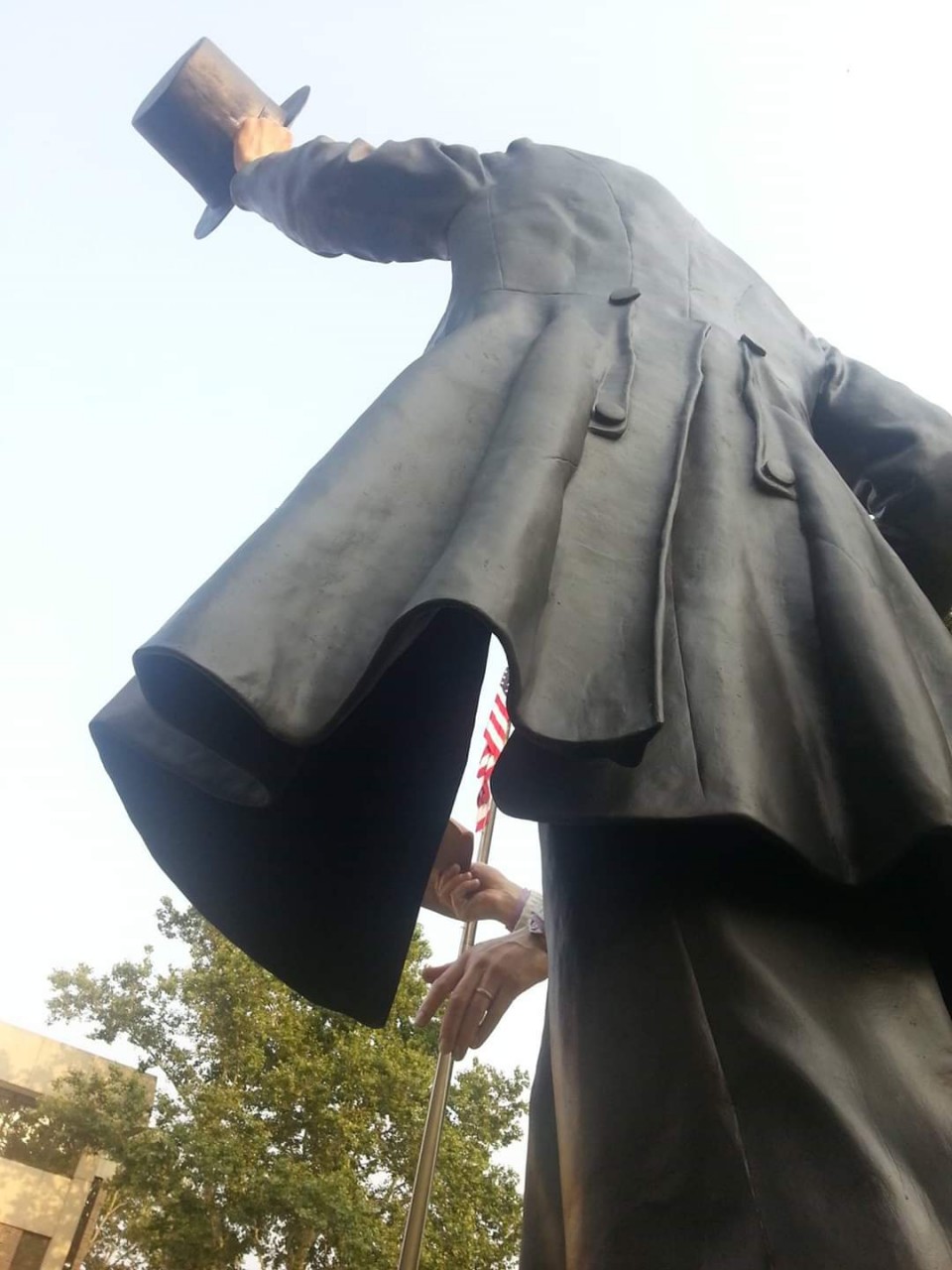 Shale Fragments™ - devotionals by Beth Ann Phifer is a division of Flower Girl Greetings, LLC. ©2020, All Rights Reserved.
Blessings and love in Him,
Beth Ann

No comments made yet. Be the first to submit a comment

By accepting you will be accessing a service provided by a third-party external to https://shale.flowergirlgreetings.com/

Welcome to Shale Fragments, a collection of writings and art for individual and group use!

Teaching God’s truth and the beauty of His Word is my greatest delight! My art card company, Flower Girl Greetings, was launched in 2012 with this purpose. In April 2020, ShaleFragments.com became the gathering place for the writings.

As I have studied the rich meanings of the original Greek and Hebrew languages of the Bible, I continue to see beautiful progressions and connections that compel me to organize and convey their life-changing beauty!