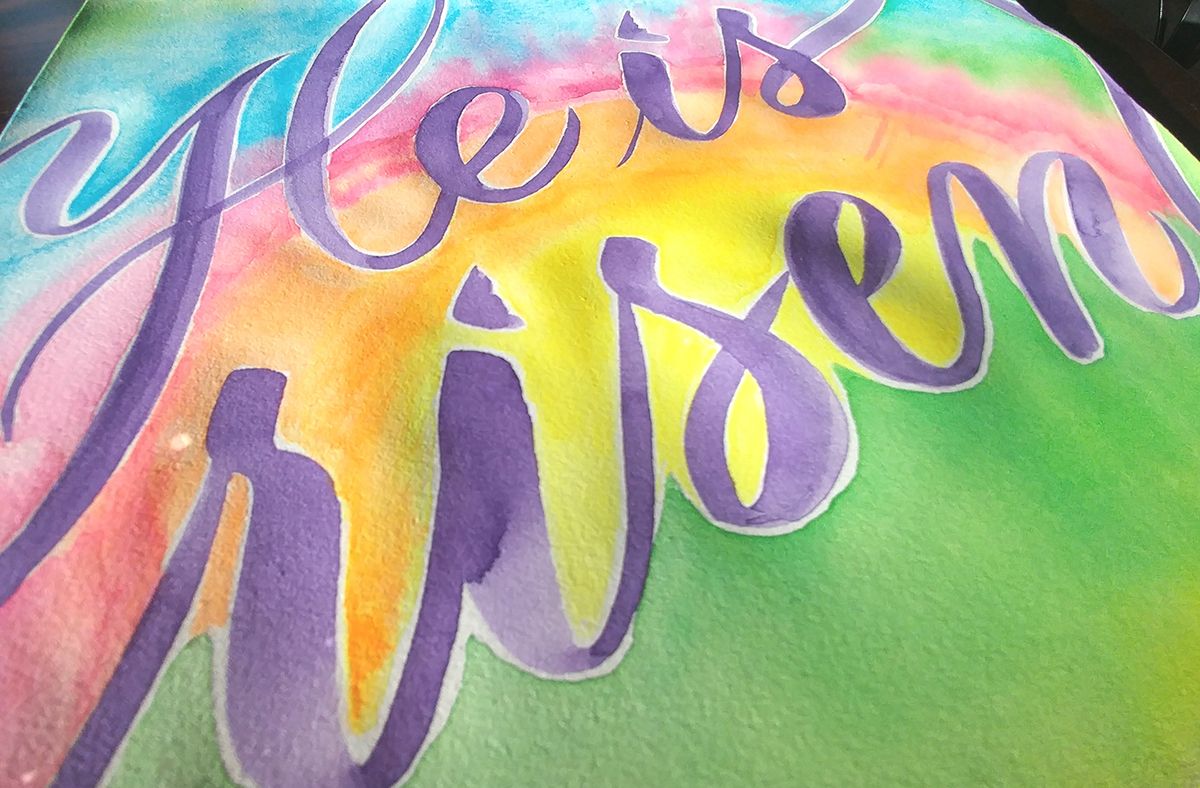 He is risen
The Resurrection of Jesus Christ the Messiah
A color-coded merging of the Resurrection accounts from the four Gospels is on the back of this watercolor Art Card.

Now when the Sabbath was over on the first day of the week at dawn while it was still dark when the sun had risen [the time must have spanned from dawn until the sun rose], Mary Magdalene, Mary the mother of James, and Salome came to the tomb bringing the spices they had prepared so they might anoint Him. They were saying to one another, “Who will roll away the stone for us from the entrance of the tomb?”

Looking up, they saw that the stone had been rolled away, although it was extremely large.  Behold, a severe earthquake had occurred, for an angel of the Lord descended from heaven and came and rolled away the stone and sat on it. And his appearance was like lightning and his clothing dazzling as white as snow. The guards shook for fear of him and became like dead men. [Luke’s account mentions two men in dazzling clothing.]

And as the women were terrified and bowed their faces to the ground, the angel said to them, “Do not be afraid for I know that you are looking for Jesus the Nazarene who has been crucified. Why do you seek the living One among the dead? He is not here for He has risen just as He said. Behold, here is the place where they laid Him.” When they entered the tomb, they did not find the body of the Lord Jesus.

“Remember how He spoke to you while He was still in Galilee, saying that the Son of Man must be delivered into the hands of sinful men and be crucified and the third day rise again. Go quickly and tell His disciples and Peter that He has risen from the dead; and behold, He is going ahead of you into Galilee. There you will see Him just as He told you.”

They remembered His words and fled from the tomb quickly with fear and great joy for trembling and astonishment had gripped them, and they reported all these things to the eleven and to all the rest, to Simon Peter and the other disciple whom Jesus loved.”

Now they were Mary Magdalene and Joanna and Mary the mother of James and also the other women with them were telling these things to the apostles. But these words appeared to them as nonsense, and they would not believe them.

So the disciples went away to their own homes, marveling at what had happened.

The He is Risen Art Card is available for purchase in the Resurrection Collection at Flower Girl Greetings.com.  It is also available as a 4-Pack here. 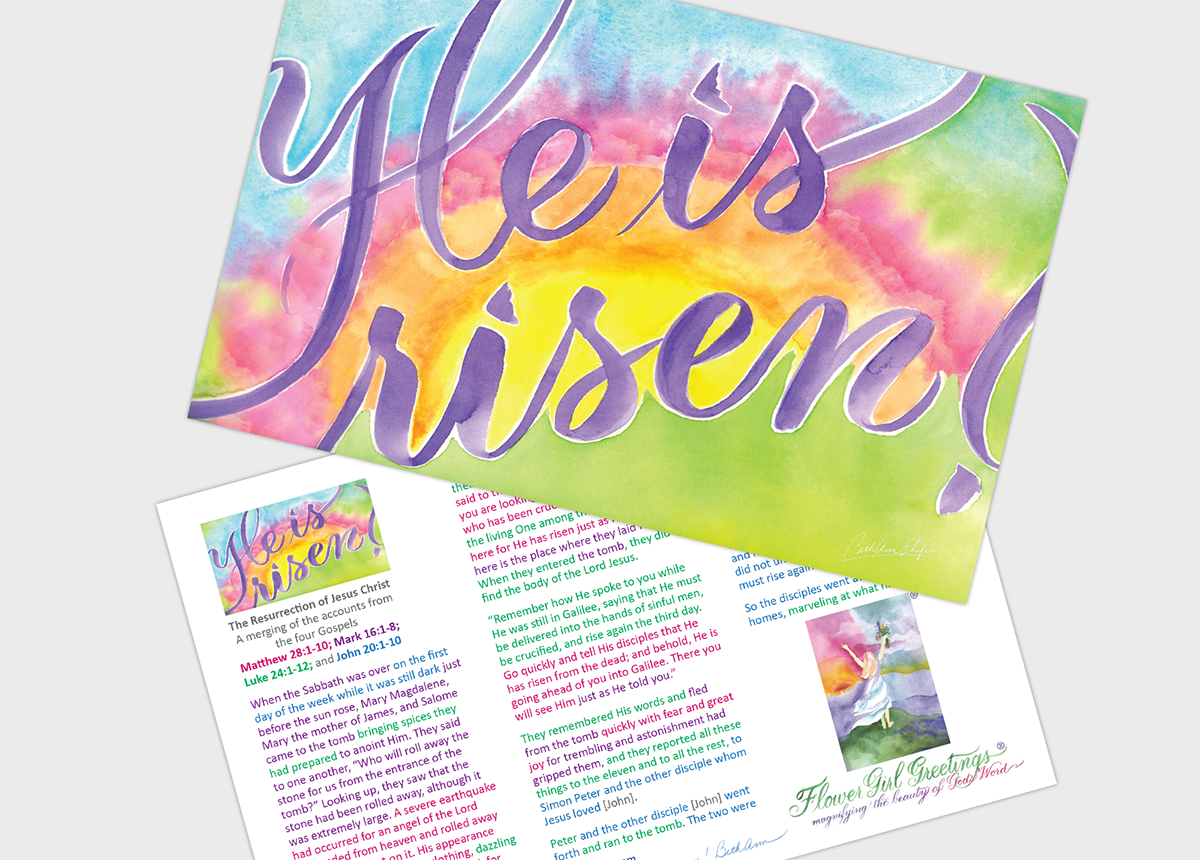 Shale Fragments™ - devotionals by Beth Ann Phifer is a division of Flower Girl Greetings, LLC. ©2020, All Rights Reserved.
Blessings and love in Him,
Beth Ann

Tags:
resurrection story of jesus the easter story resurrection cards easter cards he is risen
My Redeemer lives
Lessons for Young Women, 1 of 3 - Steeping in His ...

No comments made yet. Be the first to submit a comment

By accepting you will be accessing a service provided by a third-party external to https://shale.flowergirlgreetings.com/ 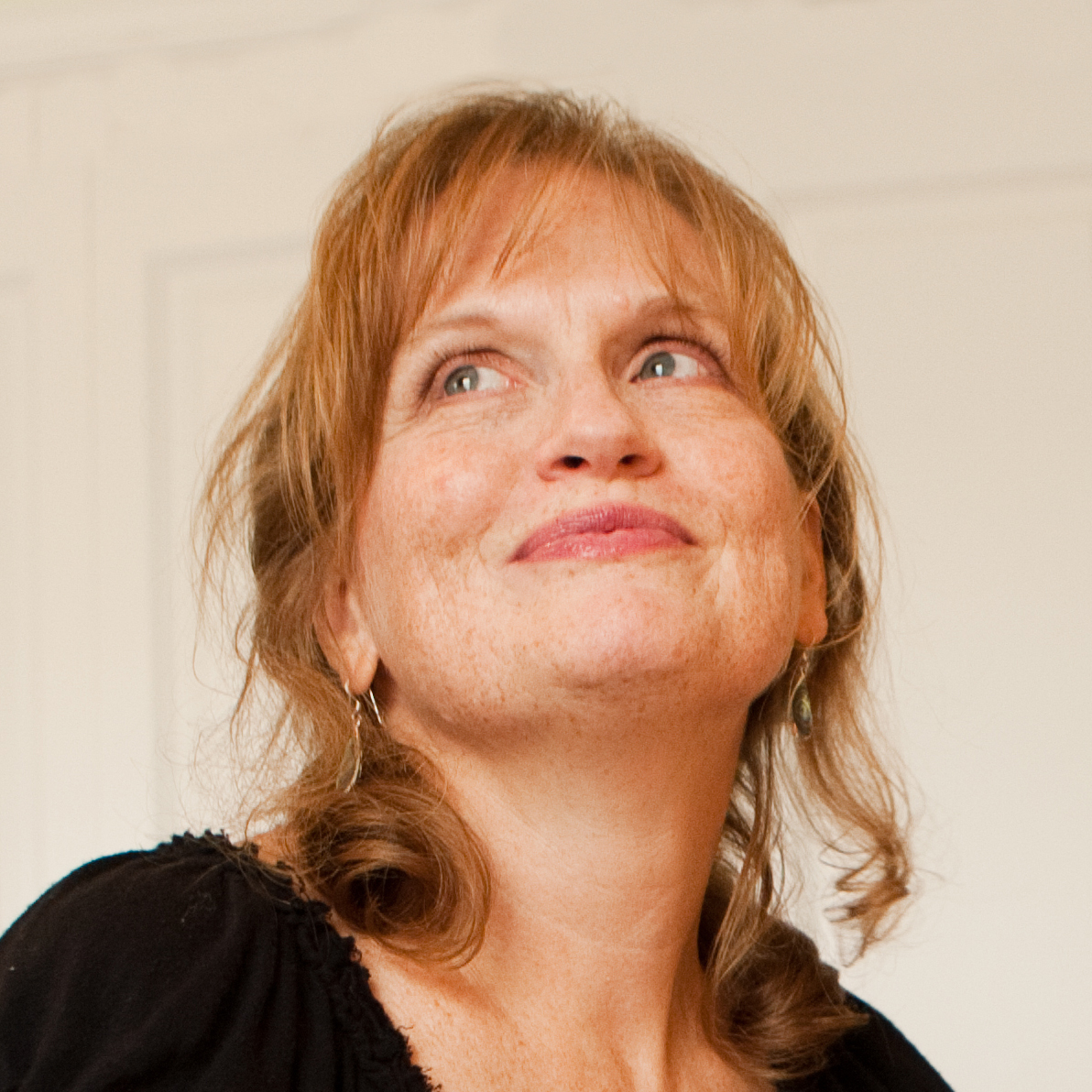 Welcome to Shale Fragments, a collection of writings and art for individual and group use!

Teaching God’s truth and the beauty of His Word is my greatest delight! My art card company, Flower Girl Greetings, was launched in 2012 with this purpose. In April 2020, ShaleFragments.com became the gathering place for the writings.

As I have studied the rich meanings of the original Greek and Hebrew languages of the Bible, I continue to see beautiful progressions and connections that compel me to organize and convey their life-changing beauty!